Use the search box to search the library's information resources. To limit your search to journals, articles etc., click the dropdown menu and select one of the options

Articles: Your search is limited to articles from journals. From your search results you can further drill down the results by using the facets in the left menu such as peer-review and online availability.

Books: This option retrieves e-books and printed books only.

Journals: Use this option if you are looking for a specific journal. The majority of our journals are available online. You can narrow your search results by using the facets in the left menu.
If you prefer to search for journal titles in an alphabetically sorted list, please use the Journals A-Z.

Databases: Enter words from the database title.
In the Database search you may browse by name, subject areas or type of content.

Welcome to the Russell Library

The Russell Library houses the historical collections of St Patrick’s College, Maynooth which was founded in 1795 as a seminary for the education of Irish priests. The reading room was designed by renowned British architect and designer Augustus Welby Northmore Pugin (1812-1852) and completed in the year 1861. The Library contains approximately 34,000 printed works with imprints from the 15th to the mid-19th century. The collection includes approximately 7,000 ESTC items, 59 incunabula, over 12,000 pamphlets in bound volumes, and 2,500 Bibles. The Russell Library was the main college library until 1984 when the John Paul II Library opened. It now holds the early printed books, manuscripts and archives of St Patrick’s College, Maynooth which has been a recognised college of the National University of Ireland since 1910.

Russell Library Opening Hours (by prior appointment only):

If you have any questions, please contact us by e-mail.

The Library received 2,000 Bibles from the Hibernian Bible Society (now the National Bible Society of Ireland) on permanent deposit in 1986. The bibles date from the 16th to 20th century.

If you want to visit other third level institutions there are various access schemes open to MU staff and students, such as the ALCID or SCONUL Access schemes.

In all cases please email the relevant Special Collections in advance in order to request the material. The staff in each institution will inform you of the relevant procedures which may be different to those here at MU Library.

For more information about locating the relevant special collections' material to your study use the latest edition of the Directory of Rare Books and Special Collections in the UK and Ireland. 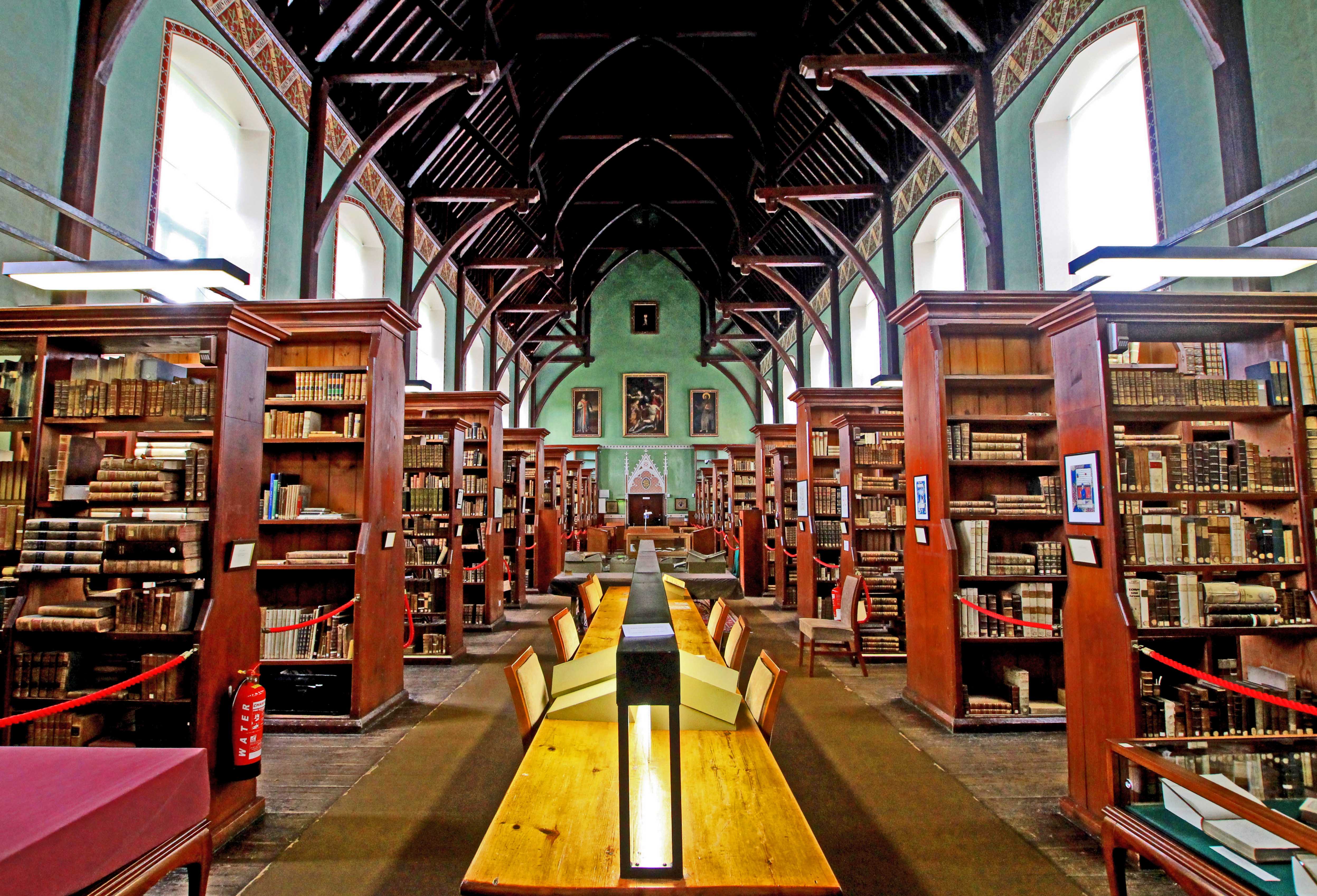 The founding collection of some 3,000 volumes was that of the first librarian, Rev Andrew Dunne. From the beginning the strengths of the material were theological, philosophical and historical with an emphasis on continental imprints. The 19th century saw the acquisition of the collections of many notable ecclesiastical and scholarly figures many of whom were associated with the college. The important acquisitions were the Library of Dr Bartholomew Crotty, Bp of Cloyne, 1840; the Irish mss of Dr John Murphy, Bp of Cork, c1847; the mss of Dr Laurence Renehan, 1857. The beginning of the 20th century saw part of the Library of the Catholic University of Ireland come to Maynooth. This included the manuscripts of Eugene O’Curry. The archives of the Irish College in Salamanca came to the College in 1953. The Library continues to add to its collections largely by bequest and donation. 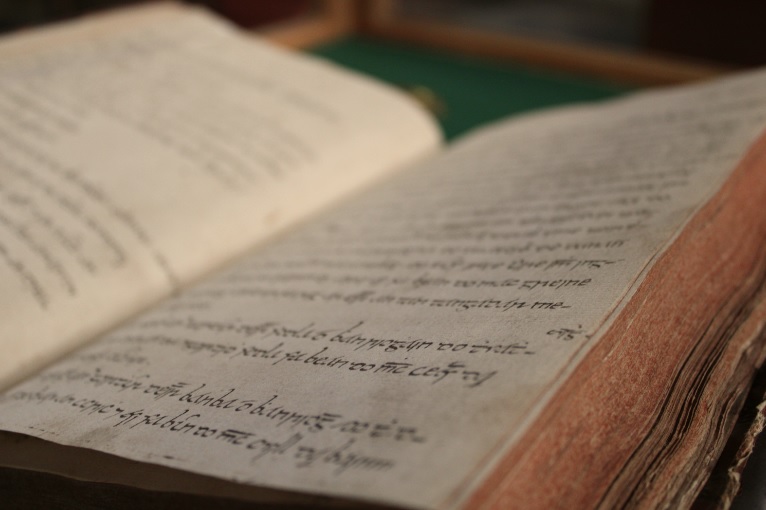 The Russell Library holds a large and important body of manuscripts, representing a rich tradition of history, religion and literature from the early 15th to the late 19th century.

A very large and important body of manuscripts, representing a rich tradition of history, religion and literature from the early 15th to the late 19th century. First to be acquired were 114 volumes, transcribed principally by the scribal family of Ó Longain, for John Murphy, Bishop of Cork (1772-1847). The Irish manuscripts collected by Dr Laurence Renehan (1797-1857), church historian and president of Maynooth (1845-1857) came as part of a large bequest. Manuscripts (115 in number) collected or transcribed by Eugene O’Curry (1796-1862), leading Gaelic scholar and Professor of Archaeology and Irish History at the Catholic University of Ireland, comprise the third major collection. A collection of fifty Gaelic manuscripts from the Library at St. Colman's College, Fermoy were relocated to the Russell Library, Maynooth in August 2013. The four major collections are listed and described in a printed catalogue begun by Paul Walsh, and completed by Pádraig Ó Fiannachta.

A small collection of manuscripts, largely liturgical, devotional or ecclesiastical, and almost all continental in origin. The earliest is an 11th century account of conciliar events in the Diocese of Rheims in 991, attributed to Gerbert, Bishop of Rheims, who later became Pope Sylvester II. The collection also contains Books of Hours from Paris and Bruges and a fine fifteenth-century benedictional with intricate penwork, which belonged to Armand de Narcès, Archbishop of Aix en Provence, who died of the Black Death in 1348.

Many of these manuscripts have associations with Maynooth. They include the following collections:

The administrative records of St Patrick’s College, Maynooth, founded in 1795 as the National Catholic Seminary in Ireland. The archives are essentially administrative rather than personal. They are consulted in the Russell Library and are maintained by the College Archivist.

The archive of the Irish College in Salamanca was deposited in St Patricks College, Maynooth on the closure of the Irish college in 1952. It is the property of the Irish Episcopal Conference and contains documents spanning from the late sixteenth to the mid-twentieth century. In total, the collection contains the archives of the Irish Colleges in Salamanca, Santiago de Compostela, Seville, Madrid, Alcala de Henares and Lisbon and also contains some material from the English College in Valladolid. The collection contains over 50,0000 individual items which include student oaths, rectors private papers, accounts, leases, books of income and expenditure and material concerning mortgages and annuities. The Irish College is, reputedly, the first of its kind on the continent and at the time of its closure, in the 1950's was the oldest Irish educational foundation in existence.The archival records can be searched here.

For all queries regarding the archive please contact the College Archivist.